History of Delhi is a story of Muslim Sultans with whom came the culture which resides in the houses even today. This story is of the Sufi saint whose shrines still light up our lives.
Persian traders who with them brought the technique of Zari also left their language in the Bazaars of Delhi. And the British officers who taught us their etiquettes
1739 Nadir Shah looted and devastated Delhi, for months the streets were filled with tears and blood, but one thing that even he was not able to take was the taste of Delhi.

My parents were born in undivided India and were the lucky ones who survived the massacre at partition. My grandmother used to tell me about how each evening people would gather around a large Tandoor to make Rotis taking turns. Very few original Delhiites remain, and this city became the city of refugees.
I’ve been born and brought up in Delhi, like many I was oblivious to the various layers this city has, and all the monuments were ruins which looked all the same. As my love for the town grew, I became a travel professional taking people along to unravel each layer. 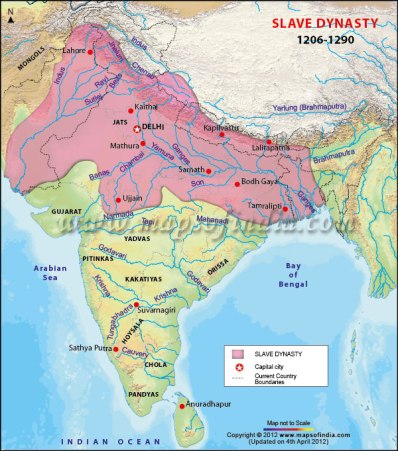 Today the population of Delhi is around 20 million and as the name suggests is the heart of India. If you look at our map, we’ve a 5000 km of coastline. Water protected us, so all the invasions happened from north-west of our country. Coming from Kabul – Lahore – Punjab you naturally entered the Gangetic planes. This made Delhi geographically relevant. Fertile, safe and a perfect stronghold for thousands of soldiers. On these very passages of conquest, the great exchange of religion culture and cuisine took place over a period of 1500 years. In the northern region, we have more varieties of grains and beyond central India, we consume more rice due to the hot and humid climate.

The modern city of Delhi is built over seven layers of various dynasty’s from the 12th century till the 20th. Food of Delhi was the food of Chauhans- Rajputs – Jats – Gurjars, then came the Sultanate period which lasted from 1192 till 1526, Turko Afghan food came to Delhi – bringing Tandoors, Sherbets and Pan.
And then with the Mughals who rules us for more than 300 years came the Persian influence, and so came various traders and their eating habits.
In other words, the Age of plenty has never ended here as it was the capital for more than 1000 years. That meant that the best of the best from around the world would be available in Delhi. 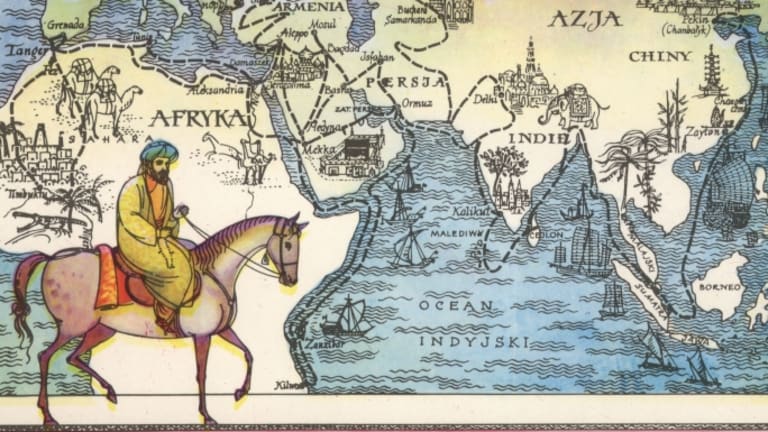 IBN E Batuta one of the worlds greatest traveller came to India in the 1330s during the Tughlaq dynasty. He noted that due to various attacks on Delhi people started storing rice in walls. When he saw them taking the rice out from walls it had turned dark in colour and tasted better. Along with its various meat preparations and birds like Grey Partridge(Titar and Bater) were being cooked too.

Today the true essence of Delhi lies within Old Delhi – Shahjahanabad. The 17th century – Old Delhi is what authentic Delhi is and rest I would say is all around it. Walls of Old Delhi are not walls but curtains – behind which you find the delicately made food with love. The day here did not start until you heard the morning Azaan and the streets around Jama Masjid were Filled with smells of nihari. 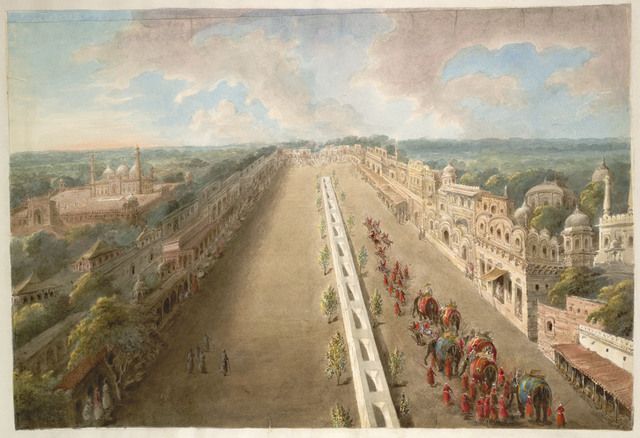 Being inaugurated in 1640 this city was built by the same person who commissioned the construction of Taj and at the same time. When the city was being constructed the personal physician of Shahjahan went up to him and told him that each person in this city is going to have an upset stomach as the Yamuna water is not drinkable. When asked for a solution he advised to add spices in food and to balance the effect of spice they should add clarified butter.
So for Non-Vegetarians, they added spices and Ghee to all meat dishes, and for Vegetarians they made Chat which is both spicy & tangy. This is what makes the street food of Delhi popular all over the country. In the Bazaars of old Delhi which have become a wholesale market, shopping and street food go hand in hand.

As you are looking at jewellery in the narrow lanes of Maliwara near Chandni Chowk the shop owner would order his boys to get Kachori from Jung Bahadur, Bhalle from Natraj and Mattra kulcha from Kinari.  It is this experience which brings you back again and again.

Another Farman(Order) given by Shahjahan was that the women of the fort will not go out to shop, the shops come to them. So along your carpets and spices came a movable feast which continues to be the pride of old Delhi residents. Khomche wale- the concept of a moveable feast is something unique to the lifestyle of a Delhiite. The person comes once a day – Makes things fresh and with such care that people change their plans to be around when its time for him to come.

Well after the Mutiny in 1857 against East India Company which started in Meerut and ended in Delhi was over and we were now under the Queen. A family from Madhya Pradesh (central India) decided to move to Old Delhi. Continuing the tradition of old delhi he started deep frying his paranthas in Ghee (clarified butter) and have been serving them to the revolutionaries, the first prime minister and to film stars since 1875. 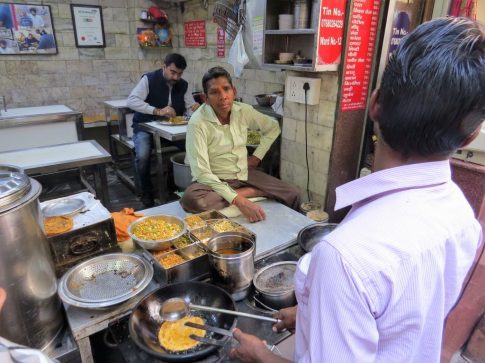 Sweets of Delhi –
Once in Delhi two rich merchants Mir Sahab and Lalajee were discussing food. Mir Sahab said “Maas Bina Ghaas Rasoi” if there is no meat in a meal it’s like eating grass  – well the reply he got was that “Khand bina sab rand rasoi” without sweets there can be no food … Some people can’t do without korma and kebabs, and some can’t do without Sweets.

The Holy Cow gives us the most important ingredient – Milk used to make most of the sweets made in Delhi. Till the Portuguese arrived in India there was no concept of Cottage Cheese or a Rasgulla. If milk curdled it was considered inauspicious. We love dessert so much that one shop is named after it – Hazari Lal Jain Khurchan waley. Khurchan is a dessert which is prepared by reducing milk on slow heat till only a layer is left in the container. Six such layers topped with pistachio makes Khurchan one of the specialities of Delhi

Just like the serpentine lanes of old Delhi, mouthwatering Jalebi can be found here too, it has an Arab origin where it used to be called as Zalebia. Made from Besan and maida it is deep-fried in Ghee and then dipped in a sugar syrup which has saffron in it. It will not be wrong to say that the sugar syrup which drips from jalebi probably united the whole country.

Khansamas(Chefs) from the kitchens of Red Fort

In 1658 when Aurangzeb imprisoned his father and left for Deccan the Red Fort in Delhi came under the control of his loving sister Roshanara Begum. Every evening the rich ladies, nobles and Amirs of the city and from Haram would arrive in the Khas Mahal for a splendid feast. They would be welcomed with Paan, Sherbet and attar sprayed on them. As they got settled and welcomed Roshnara begum by bowing down in respect the feast would start. Some 200 hundred dishes prepared by 200 chefs made from ingredients procured from around the world would be served.

Few of the people who stayed back started eateries like Karim’s in Old Delhi. One of the popular dishes apart from other delicacies is Mutton Ishtew, an Anglo Indian dish made in the kitchens David Ochterlony the first English resident of Delhi. He had 13 wives, dressed like Mughals and conducted lavish parties each evening. His cook made this dish (meat 1 Kg – 400 gm Onion – 1kg Tomato – 1kg Curd – Whole Ginger & Garlic – ghee ).
Mutton stew or other meat dishes in Delhi are eaten with Khamere Roti.

Khameer means yeast- Yeasting goes back to 2000 BC, ie 4000 years ago in Egypt, and it reached India in the 13th century with Central Asian people. Various types of breads are prepared with this process like Dessert Rotis – Bakharkhani – Sheermal – Kulcha. 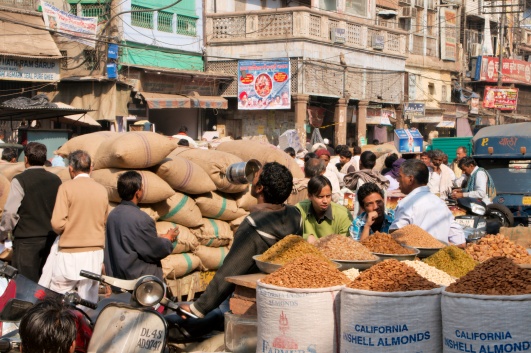 Khari Baoili one of Asia’s biggest spice market was set up in 1551 by Sher Shah Suri near the prominent Lahori Gate of Shahjahanabad. Stores here have been running for around 11 generations, and being on the trade route ingredients like Gum, Silver, Gold foil, long pepper etc. were available to serve Dilli walas.

The first references of Dates (Khajoor) can be traced back to almost 3000 years ago from excavation done in the Old Fort area of Delhi, and with it traces of the use of grains like Wheat, Jawar, Barley – Meats, a Beer called Fukka and a Wine called Sura.

Sufism in Delhi
A Sufi is considered as a pure soul, and it is believed that if you have your grave built near a Sufi dargah you would be allowed into the heavens with the blessings of the Sufi. It has been an age-old tradition to give free food and help the poor or travellers coming to the city. It is said that at the Dargah of Hazrat Nizamuddin Auliya in the times of Sultan Allaudin Khilji, after every 3rd day all money, food and belongings were distributed. Langar which ran all through the year was food cooked in large quantities for the purpose of charity.

Today the lanes leading up to the Dargah are filled with places selling Nahari and Kebabs and people from around the country flock to the Dargah to seek his blessings.

In 1911 when the British shifted the capital from Calcutta to Delhi few businessmen and traders shifted their base, and later when East Pakistan was converted to Bangladesh in 1960’s a large number of refugees came to Delhi. One such very affluent colonies today was a place allotted to refugees.  Chittaranjan Park is a piece of Bengal where you get Kolkatta style rolls and the best of Bengali sweets among other things.

My relation with Delhi has been like a traditional  Indian arranged marriage, this meeting was arranged by my parents, and now I can’t imagine living without the other. I have fallen in love with the Tehzeeb of Delhi. So be our guest and as you remove the curtains before you enter within, you’ll find people, sights, sounds and smells all welcoming you with warm hearts and delicious food.